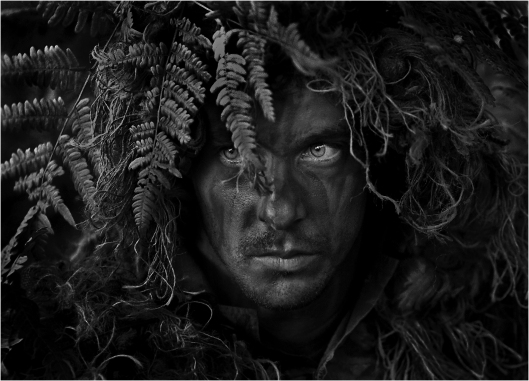 The Scout Sniper Course at Marine Corps Base Quantico, Va., teaches Marines the art of stealth. The train is tough. Few will actually complete the nine-week course. Those who do will return to their platoon as 8541 Scout Snipers. 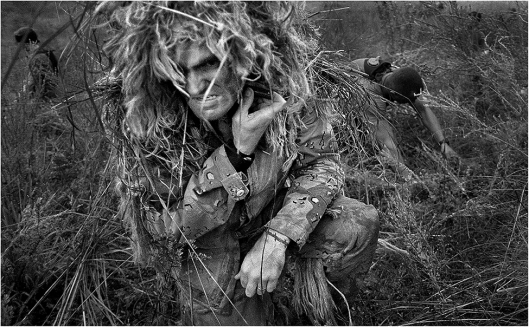 Preparing for a stalk, Sgt. Brian Calloway applies cammo paint to his face. He has 30 minute to “veg-up” before making his way toward his target. While en route, he will change the types of vegetation woven through his ghillie suit several times as he encounters even the slightest variations of natural cover during the stalk.

An instructor briefs the students on the terrain they will encounter for the next day’s stalk.

A scout sniper student makes his way into tall grassy cover to begin a stalk. 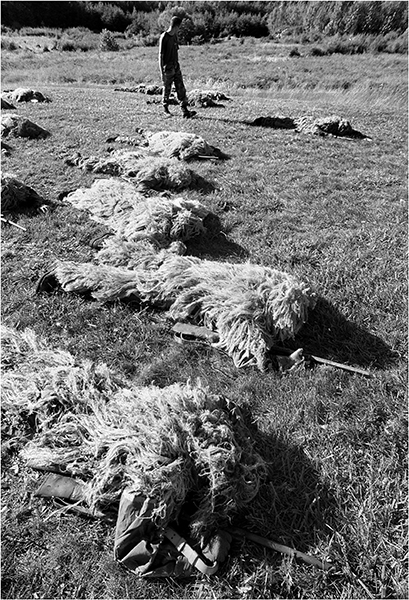 Under the supervision of an instructor, scout sniper students learn the art of the skull drag. Keeping their heads down low the student practice stalking.

A sniper student is evaluated as he sets up his final hide and takes aim on the observers trying to bust him.

Long hours of training day and night take their toll. Marine rest out in the field in between training sessions.

Each student is required to make their own ghillie suit using a mixture of burlap and netting sewn to a reinforced jacket. The material must be carefully selected to achieve proper balance of contrast and natural color. Because of the nature of scout sniper operations, every detail concerning camouflage is extremely important. Keeping a low profile and avoiding detection is the best life-saving protection a sniper has.

Marine Scout Sniper students retrieve their weapons from the arms room each morning as they begin training. The rifles are custom modified to maximize accuracy.

Scout Sniper School students spend a great deal of time at the known distance rifle range where they practice marksmanship, shooting targets up to 1,000 meters away.

Bullets whiz by overhead, as scout sniper students take turns working the targets, pulling them up and down to mark the shots of their fellow students. 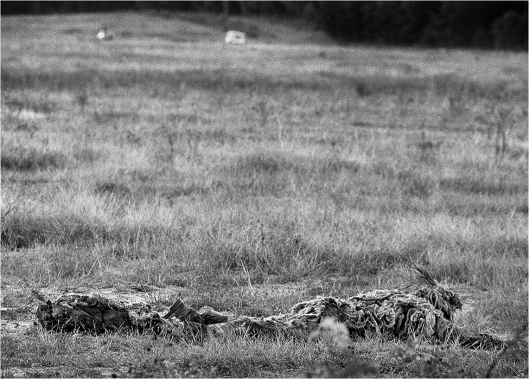 Low-crawling through relatively short vegetation, a sniper makes his way to the vehicles in the background where he must get within 100 yards without being detected, fire a blank round, and leave the area, again without being seen by spotters.

Using high-powered range-finder binoculars, an instructor looks for signs of the Marine Scout Sniper students as they attempt their third stalk of the course. 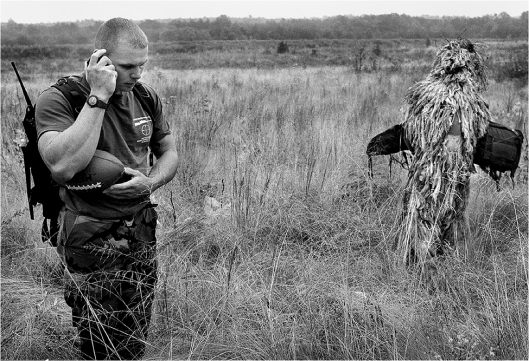 A Marine is sent packing to the sidelines after being discovered by observers during a stalking exercise. Observers scan the “playing field” boundaries with a pair of powerful laser rangefinder binoculars, waiting for the trainee to make a wrong move. To pass the test, the sniper is given 4 hours to stalk within 200 yards of the observers, identify his target, fire two blank rounds of ammo and crawl away undetected.

A student is told he must drop the course, because of mistakes made writing a patrol order. A substantial portion of training is conducted in the classroom. A high percentage of prospective candidates won’t make it through the course. Most who are “mulched-out” fail due to academic problems, or physical injuries. Only 7 out of the 23 Marines graduated from this 9-week course.

Cpl. Taylor Slate changes into a pair of dry socks after a stalking event. Extreme temperatures and sweat-soaking humidity have contributed to immersion foot, a condition commonly known as jungle rot, which causes flesh to peel off, adding to the painful blistering the Marines are already suffering from during the long patrols they have endured over the past 4 days.

A group of scout snipers participating in a Marine Corps-wide scout sniper competition are driven to a start point for a week-long event.

Sgt. Matthew Lambert and Cpl. Toby Richard shake off sleep deprivation and pain from blistered feet as they rise from a short break, continuing toward their objective during a timed land navigation exercise. 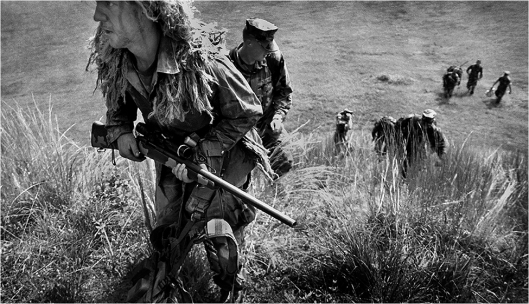 A Marine makes his way up a steep hill where he will engage targets during a timed 1,000-yard shooting event.

Following 3 days of intense physical exertion with little sleep, a scout sniper student exhausted and near the point of collapse, is encouraged to keep moving during a 1,000-yard sprint and shoot exercise. The Marines who complete the training will qualify to serve as scout snipers within reconnaissance battalions.

Catching his breath after completing a 1,000-yard sprint transitional shoot, Cpl. Toby Richard is given a cool splash of water by teammate, Sgt. Mark DePhillips.

All images / photographs / content / on this is site is the copyrighted property of Steve Bohnstedt. Please do not copy, or reproduce these images in any way without my written permission. Purchase of images does not transfer reproduction rights. For information about purchasing or licensing images simply leave a message in the comment area of any post, or email me at: brooms25@yahoo.com Thank you for dropping by.

If you want to be a hero well just follow me

Art is not a pleasure, a solace, or an amusement; art is great matter.--Leo Tolstoy

Adventures of a Book Addict

Life with Literature, Lattes, and a Little Pug

Welcome to the world of cats!

World through my lens